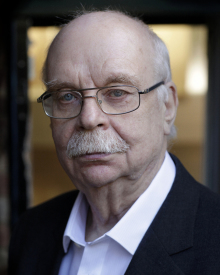 I was born 1946 in South Norwood, the County Borough of Croydon.  I went to Cypress Primary School and then to Selhurst Grammar School for Boys. After leaving school, I worked for Norwich Union Life Assurance for one year before moving on to work at Grant Bros of Croydon’s department store, where I met Julie Woodcraft.  I subsequently worked for The Croydon Advertiser as a drama stringer and general reporter.

I passed the audition to The Central School of Speech and Drama in 1965, and completed the acting course in 1968.  I left on the Friday, started my first job (as an acting ASM) on the Monday, and four months later married Julie.

Our first child, Emma was born in 1979, and the following year the family moved from South London to The Cotswolds, where we’ve lived ever since. Our son, Alexander (Ali) was born in 1982.

Click on my image to see my current Showreel